“Servant!” shouted Claire to the waitress in the restaurant. Claire had never eaten out before and did not know how to talk to the waitress or order food from the menu. June explained to Claire how you ordered food and how to get the waitresses attention.  This was one of many adventures that June and Claire enjoyed together as friends with The Friendship Project for Children.

Claire was referred to The Friendship Project for Children at the age of 6 years old by the Home Start project. Claire was a very shy little girl and had little experience of play and socialising with other children. There were serious drug problems within the family and Clare had two younger brothers whom both needed specialist care and attention. Claire needed time to be a child, rather than caring for her brothers. Claire’s primary school and Mum were very supportive of the idea of her having a volunteer to take her out for friendship and fun.

June, our volunteer, had found her life had recently changed and she was looking for another challenge. She had recently been divorced and important family members had sadly passed away. June had time on her hands and was interested in volunteering with The Friendship Project for Children. She was interested in befriending a young child and becoming an important part in his or her development.

June was matched with Claire and they embarked on a variety of activities agreed by the two friends and approved by Mum. These included: swimming, cinema, rock-climbing, dog walking, cooking, going for lunch and horse-riding. Regular horse-riding sessions soon became the favoured activity for Claire. This was originally suggested by June’s Area Co-ordinator who had met Katy, who ran a riding school in Leicestershire, some 20 miles away. The journey allowed the friends time to chat and get to know each other. Claire’s family did not have a car and Claire enjoyed being picked up by June and driving in the countryside.

The riding school had four therapy horses providing opportunities for children to develop their riding skills alongside the capacity to learn about the care of the horses. Claire gained experience of feeding, grooming and mucking out at the stables. She also looked after their hens and collected the eggs.

Claire was able to socialise with the other children (whom she remains friends with to this day – one has become a very special friend to her). Whilst the children were having fun with the horses, June was able to chat and interact with the other parents. Claire enjoyed the sessions so much that at the age of 14, Claire became a Mentor to the younger children at the stables. This involved passing on tips to beginners about feeding, grooming, riding and safety techniques. “I can help others because I was given help, confidence and support by June at an early age” said Claire.

Claire’s relationship with her Dad was difficult. June would pick her up after visits with her Dad and take her horse-riding. This provided vital support to Claire who felt safe with June.

On their adventures together, the two friends enjoyed themselves and had lots of fun and laughter. June taught Claire to swim which was a great achievement and gave Claire a huge boost of confidence. Going out for a meal for the first time, reading the menu and choosing food that Claire had not eaten before, was a great experience. Later, at secondary school, June helped Claire with projects and encouraged her to use the library.

On leaving school, Claire enrolled on a course at the local college training to become a Classroom Assistant and hoping to proceed to a level 3 qualification.

June and Claire were friends within The Friendship Project for 10 years, during which time they both benefitted greatly from their experiences together.

The two friends keep in touch with each other regularly and Claire talks to potential volunteers about her experiences with June. June has a new friendship and she is enjoying having fun with her new younger friend.

“My experience with June as a younger friend has been a rollercoaster that I wouldn’t mind riding again and again. When I met June I remember going out and wanting to go to McDonald’s and teaching her how to use the drive-thru, which still frightens her to this day. The experiences I enjoyed included when we would go out to new places and use the sat-nav to help us get there. We still managed to get lost! Another experience that I giggle about is going to a restaurant and having a meal. When I couldn’t eat all of my dinner but I could eat my pudding, I was certain that I had two stomachs; one for my dinner and one for my pudding!”. Claire

“I have always looked forward to going out with Claire every weekend because it gave me something to look forward to and I also had many new experiences which I wouldn’t have gained on my own. We laughed a great deal and in particular, I remember taking her to a restaurant and she wanted a refill for her coke and she shouted ‘Servant’ to the waitress! I then explained to her how we talk to people in a restaurant. We used to have good fun in the park with my dog Keira, we would throw the ball and race to see who got it first, the dog usually won. Swimming and ice skating were often very physical so always helped with my ‘steps’! I have also made many new friends through our friendship and it has been a pleasure to know her family. I have received as much satisfaction and benefit from our friendship as Claire has”. June 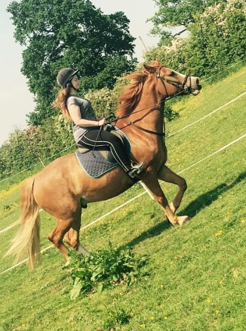 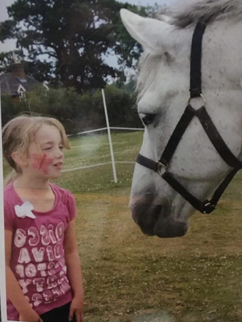